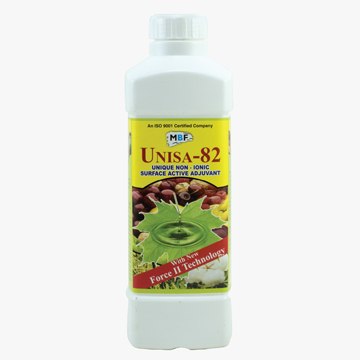 UNISA-82 is neither a fertilizer nor a pesticide; it is an unique surface active adjuvant, increases crop yields by improving performance of the pesticide dissolved in water. Unisa-82 fastens the soil penetration which has given best results in crop fields like paddy. Unisa-82 makes the soil more porous and friable by reducing the surface tension of water on soil and makes easiest nutrient uptake. Unisa-82 has also increased the yields of tea plantations.

Use with herbicides:Add 15-20ml per 15L of water and mix thoroughly.

Use with Insecticide and Fungicide: 5ml per 15L of water.

Use as Irrigation aid:Add 150ml of UNISA-82 in 80L of water per acre and wet the ground.

Pre Trials: When using first time, make a small compatibility test before adding any of the chemicals to the spray tank.

To maximize the performance of pesticides or herbicides must come in contact with the target. The efficiency of the product increases with increase in area of contact.

MBF UNISA-82 contains a surfactant that reduces the surface tension of water causing water droplet to spread out. When water falls on the water repellent waxy surface of the plant leaf, it tends to remain on the surface in the form of tiny droplets (beads) covering the minimum area.

This means that the water droplets do not spread out evenly over the leaf surface leading to poor wetting of the leaf surface. Since water is the liquid carrier of the herbicides / pesticides, this beading limits the coverage and the effectiveness of the herbicide being used. When the pesticides are dissolved in water containing MBF UNISA-82 and sprayed on plant, it spreads out more evenly and the result is much better pesticide / herbicide coverage. Addition of MBF UNISA-82 in water helps to penetrate pesticides / herbicides in the surface of leaf & soil faster and more evenly.